Anyone Paying Attention Yet?

Yesterday, I published a chart - intentionally again trying to see if anyone is paying attention to degree labeling. It was a test. No one is paying attention. Few are challenging. I even gave you a clear clue in the write up. I said, that "I would add the note that since ((1)) is slightly longer than a, then a 1-2-i-ii from the low would seem to violate degree labeling."

But, therefore that also means that as a sub-wave of an ending diagonal, then ((1)) of an ending diagonal c wave would also violate degree labeling. No one is paying attention. Few people get it - or at least no one says so after 24-hrs. Further, I published the ALT labels. I did that for a reason. The ALT labels are the correct ones because of the degree labeling requirements. 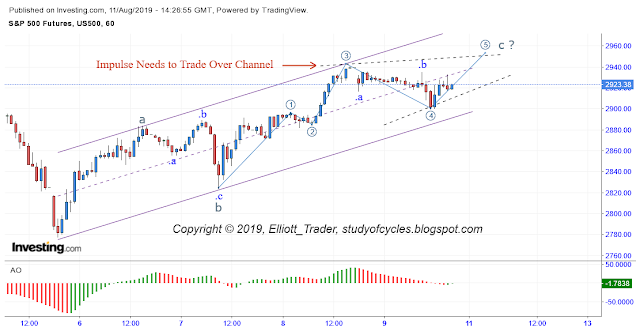 C'mon people ... thinking caps on.
Have a good rest of the weekend.
TraderJoe
Posted by Elliott_Trader at 10:37 AM