Today was a fairly narrow range day and might represent some of all of wave iv from yesterday's intraday chart - see LINK here. As of this time there was no upward overlap on wave i of the potential impulse. The daily ES futures did make a new daily low early in the morning, but then they formed a doji by the close of the cash market and price is still fighting at the 100-day SMA. The daily chart is below. Today was the second close below the parallel, and the close is still below the 18-day SMA so the daily bias is still down. 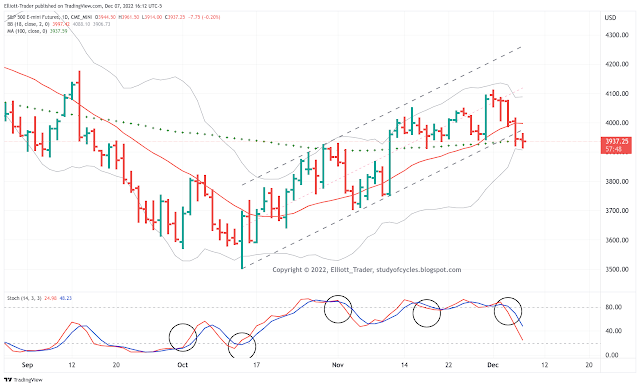 Tomorrow could be another whippy day. It might start lower on comments from the ECB (Christine LeGarde, see Economic Calendar) or the weekly jobless claims and - based on the wave count - it might then whip around higher, perhaps after testing the lower daily Bollinger Band. We don't know for sure; we just surmise from 1) the wave count, 2) the news, and 3) the market's position relative to the band.

The daily slow stochastic is in over-sold territory, so the market might have a bit more down-side but would not like attract the new positions of the so-called Smart Money. Rather, the first hit of the lower band, in conjunction with the 100-day SMA, is where the Smart Money may merely take some profits and wait to see what occurs next. The Bollinger Bands are beginning to narrow in a bit, so some consolidation might follow.

We note that the 18-day SMA ("the line in the sand") is still above the 100-day SMA, and it has not crossed lower yet. If it were to do so, it might provide more confirmation of a market turn lower.

Have an excellent start to your evening.

Posted by Elliott_Trader at 4:31 PM No comments:

Is the diagonal already complete, and now morphing into an impulse? Here is the ES 30-minute chart with this wave counting idea shown. The symbol x i means the first wave would be the extended wave, the longest wave in the sequence in price.

When looked at using the futures, the third wave of the diagonal ((3)) does not look as awkward as it does in cash with this count. The fifth wave of the already completed diagonal ((5)) would have stopped short of the lower expanding diagonal line - just as the literature reports several do. Although I am showing a close-only chart so that form may be studied, the idea has been checked on OHLC charts and it works there, too.

The very substandard second wave retrace (less than 38%) would fit with a second wave only if the first wave is the extended wave in the sequence. So far, wave iii is shorter than wave i.

Have a good rest of the evening,

Friday's hanging-man candle in the futures did get confirmation lower today. U.S. equities as measured by the SPY cash ETF opened with a gap lower, and followed-through. First, a reminder of the weekly count. 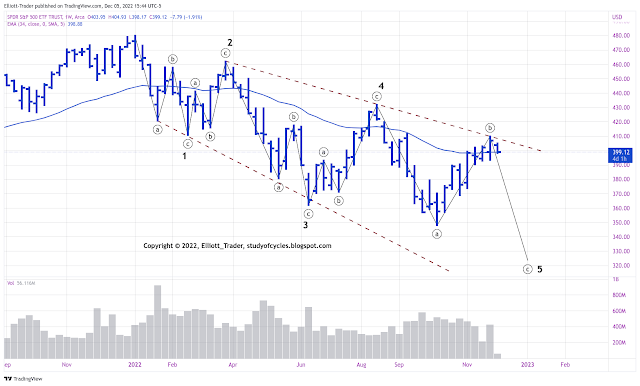 Prices fell off of the upper dashed expanding diagonal trend line in an interesting sign. Now on to the plausible daily count. 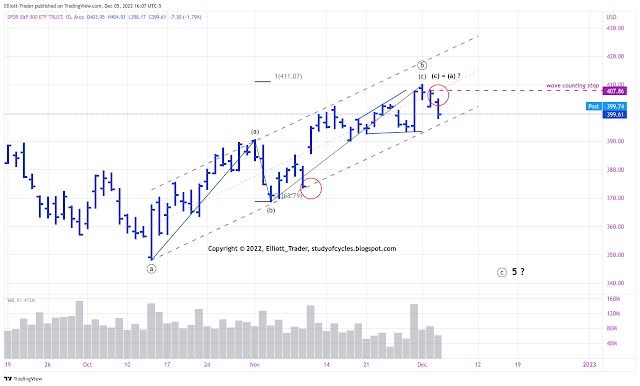 The count of a (c) = (a) zigzag with an expanding ending diagonal for the the fifth wave, v, of (c) would expect to see prices drop below the start of the diagonal at the 390 level in less time than the diagonal took to form. The Fibonacci ruler shows the (c) = (a) level.

As of yet, price has not dropped below the dashed lower uptrend parallel. It needs to do that, and back-test that line and then fail the back-test with a lower low candle. Again, I am not in love with any particular up count at the moment. This one has some strengths to it in that it would follow degree labeling considerations. If you also called it (y) = (w) I would see no reason to argue.

I would also just add that as of the cash close, the ES futures daily slow stochastic was no longer embedded. This needs to be watched for the next day.

Daily ES prices continued to close above the 18-day SMA. Therefore, according to what Ira teaches in his public videos, the price bias remains up. The daily slow stochastic is still embedded. Therefore, the so-called Smart Money may still try for the upper daily Bollinger Band. They didn't do it today. They might have but it didn't happen. So, let's go down to the Intraday Wave-Counting-Screen, which mirrors on the 30-minute timeframe the same guidance as for the daily chart. 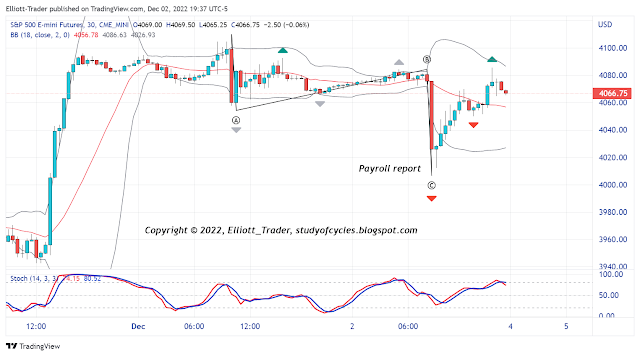 Here you can see the spike down in the futures which accompanied the Payroll report. Following this wave which was only about 1.27 x as long as the first wave down, there was not a fourth and a fifth wave down. The payroll candle took out the two previous down (grey triangle) fractals.

When prices turned and hacked & hacked higher, they initially created an upward wave which is followed by a down (red) fractal. However, price ended over the 18-period SMA, and so even the intraday chart ended with a positive price bias. The intraday slow stochastic is over-bought and not embedded at this time.

We have tentatively labeled the down move as an ((A))-((B))-((C)) down. That's all there is. A fourth wave higher that did not overlap did not form, as neither did a fifth wave lower.

At this point, if one were to draw Ira's swing-line on the intraday chart, it would be indecisive because there is a lower low and a higher high at the end of the day. Because of this indecision, one of the best strategies is to Let The Market Decide at the moment which way it wants to go.

Yes, we can make arguments that we may have started a diagonal downward, as in ((A))-((B))-((C)) of a wave i, downward, and that the afternoon high is a wave ii, upward. But the upward wave may be completed, or it may not be. The jury is still out.

And, just like we can make an argument for a downward diagonal, we can make a good case for a triangle pattern, too, that might lead to higher highs.

So, watching those fractals for a bit might be an excellent strategy. If the first down (red) fractal back is broken it is only of minor significance because until the morning low is broken, a FLAT wave could also occur - still making new highs eventually.

Fractals are the location where the markets make decisions. You can try to out-guess them if you want. That is up to you. But remember where the daily bias is pointed. And if you chose to fight it, then at least recognize clearly you are fighting that bias, and it is you that decided to.

Otherwise, although today is known as a "hanging man" candle day, there is no confirmation of that candle until a new daily low is made. Isn't it interesting how that fractal at ((C)) and the confirmation of the hanging man would likely be at the same place??!!

But, further, looking at daily seasonals, since Tuesday is often (not always) a turn-around day, then if there is a triangle into Monday, the prices could pop on Tuesday to then make a better full-reversal bar. Nothing like that exists on the daily chart yet.

So, be cautious, be careful, be patient, keep your wits about you. The volatility is difficult to deal with, and the wave count is only of secondary usefulness right now to outline some of the shorter-term risks. Hopefully, some clarity will be provided soon.

And remember, Ira does not recommend outright short positions until below the 18-day SMA. This is in order to get the wind at your back if at all possible.

Have a good start to your evening and your weekend.

It remains an extremely difficult up count. Here is the chart of the ES 8-hr futures. Price would still be within (c) = (a).

The alternation would be diagonal (a), impulse (c). The (c) wave would have a very long-in-time wave iv to alternate with the short, sharp wave ii.

Again, nothing says the up wave is over until/unless the lower parallel trend line is both broken and then back-tested with a new low after a failure.

Have a good start to your evening.

FED Spaketh, Dollar Dropeth, Stocks Riseth: based on our intraday comments and count, we were expecting an up day today. We were expecting a potential ((C)) wave, up. We did get more than that. A new local high occurred on the daily chart. And, to be honest, we were not expecting that. 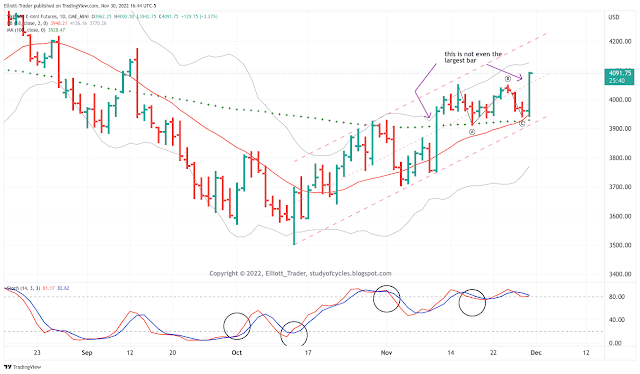 The daily slow stochastic which had lost it's embedded reading yesterday regained it today. Here's what I want to know: even though I was watching it, what allows the FED Chair to pick a Brookings Institute meeting to clarify FED policy to such a degree, and, yet, as the result of FOMC meetings absolutely none of the clarifications occur in those press conferences? In the press conferences, he confuses, he obfuscates. Here he clarifies and in express detail says what he is looking for. Really. Why today? In case you don't get my drift, it feels over & over again like the fix is in. How would it be known that the this FED speech gets as much attention as an FOMC announcement (in terms of access for the public)?
Something really stinks. Do I care what the new announcement precisely is in detail? Very little. Do I care that the FED itself is creating an unbelievable amount of market volatility all by itself? I do. I really do. Some serious money could be caught the wrong way in such a move. Somebody could get royally hurt. As the chart shows, today's move isn't even the largest up move - although to listen to the financial media, you'd think that the Equity Gods had visited Wall Street in person today.
No, as I have said repeatedly, there is nothing doing to the downside until or unless that lower parallel trend line is broken, then back-tested, and then the back-test fails. That just hasn't happened yet.
And I really hope - with all the FED members caught insider trading, against the FED rules, and with the "off calendar" monetary missives - that FED Chair Powell is sleeping well at night. I, for one, have lost all respect for this organization. And for him, in particular. I listen to what they do - because I have to. I listen to what they do because, as a retail trader, they will essentially vaporize my account if they don't. I don't listen because of their wisdom, their finesse, or their skill. They are engaged in market manipulation, and worse, and I simply do not condone that.
Have a good start to your evening,
TraderJoe
Posted by Elliott_Trader at 5:18 PM 18 comments:

The price structure could very well be "short-a, long-c; long-a, short-c" for (w)-(x)-(y) overall in the SPY hourly chart. The close-only chart is shown below to concentrate on form and timing. Let's see if any confirmation occurs.

I still want to see price trade below the lower channel boundary, back-test it, and fail with a lower low. The items in favor of confirmation are that the highest high is not on or above the upper channel boundary which is a sign of momentum loss, the lower Elliott Wave Oscillator, and the possible truncation high.

Have an excellent rest of the day.