In our previous post, we cautioned that today could be a day of 'window-dressing' with its attendant sloppiness as portfolios are reconfigured the end of the month. As you can see from the intraday chart below, that is what occurred at the beginning of the session.

Prices declined - during the cash session - from approximately 3,632 to about 3,592 in the first 90 minutes of the session. After that, there was an attempt to buy-back the highs in a likely front-running of the 'first-of-the-month' money which typically enters the market. As soon as the cash market closed, the buying became more serious and continued into the after-hours, so far.

Over the last couple sessions there was downward overlap, preventing a five-wave impulse out of the triangle, so the larger wave count depends significantly on whether a all-time-high is made or not.

Meanwhile, in terms of another market, according to The Eight Fold Path Methodology, today the US Dollar Index confirmed its fifth Minor wave, down, Minor 5, and needs to begin to be monitored closely for a turn.

Posted by Elliott_Trader at 7:31 PM No comments:

From yesterday's post, we continue to look for five-waves-up with a non-overlapping fourth wave. The market made some whippy holiday-light moves, but nothing has invalidated yet. Here is the ES hourly chart, again. 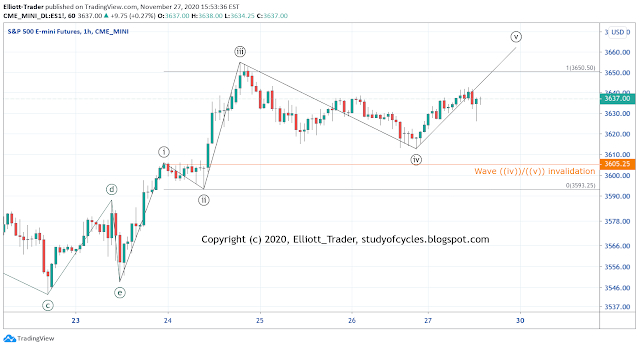 While there was a slight tick downward below the 25 Nov low, there was not overlap with wave ((i)). The market then recovered this morning and made a slightly higher high than the 26 Nov high.

The proposed expanding leading diagonal we showed yesterday played out on the 5-minute chart in the overnight, and played out in the following fashion, having to increase the time-frame to the 15-minute chart to show the subsequent bars.

Leading diagonals are often "A" waves. So, there was good reason to suspect this one was too. After, a diagonal - for reasons of alternation - the "C" wave that follows an "A" wave should be an impulse, and not a diagonal. Here you can see clearly labeled are five non-overlapping waves up, likely for the "C" wave, after a three-wave decline that just breeches the lower border of the diagonal.

I should just indicate, this is "as expected". One expects a diagonal followed by a not very deep retrace to be only part of an a-b-c sequence, as you see here.

So, back to the hourly chart. Price still needs to get above wave ((iii)) to confirm a fifth wave ((v)) in progress. But, I am wondering if the deep and long fourth wave, doesn't possibly mean the fifth wave might extend. Notice in the first chart that wave ((iii)) and wave ((i)) are very nearly at equality with each other, but wave ((iii)) is, indeed, the longer wave.

This is a reminder than Monday is the last trading day of November - with the potential for sloppiness due to 'window-dressing' - and that Tuesday is the first trading day of the new month with the subsequent potential inflows from pension funds, 401k's, company bonuses, dividend reinvestment plans, etc.

We'll see how it goes.

Have a very good rest of the holiday.

With the invalidation yesterday of the downward expanding diagonal we showed in prior posts, and conversion of some of it's waves into triangle format, that left a count that we labeled yesterday tentatively as a 5-3-5 structure. On the ES hourly chart, we may now be working on that last -5 as shown in the chart below. 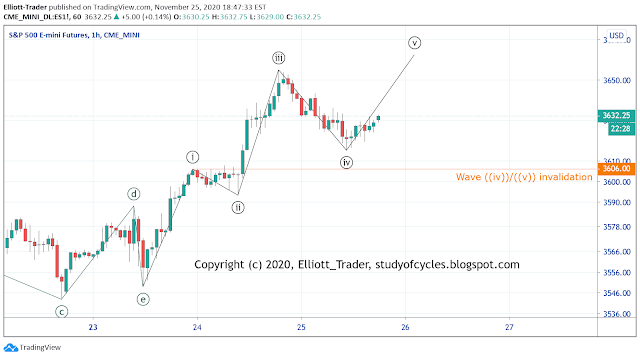 After the ((e)) wave of the triangle, there are currently three-waves up, and a fourth wave down if it doesn't invalidate. Readers should verify that all of wave ((iii)) in this count is above a line from wave ((e)) to wave ((ii)).  The ((e)) wave is the 'origin' or 0 point of the new upward wave. There is a Flat for wave ((ii)), and as it sits now, wave ((iv)) is a longer-in-time sharp wave for alternation - provided it does not invalidate. As it was, wave ((iv)) was so long that it created a 'close call' with overlap.

Intraday today, we showed the Classic Pivot Points, and the support at the low of the day on/near the Daily Pivot Point (PP). We then began counting upward on the ES 5-minute chart, as below. 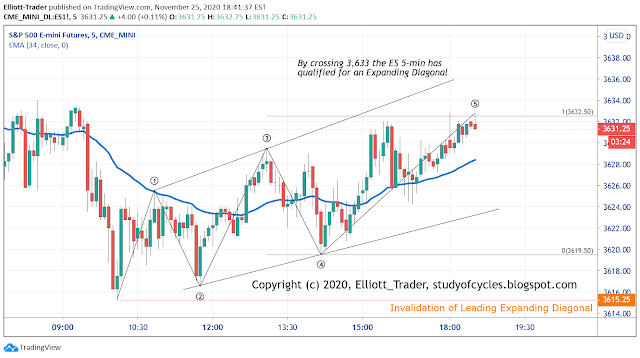 There is no guarantee that the upward movement is over. Sometimes wave ((5))'s get very aggressive. But, when the proposed diagonal has ended, then it must by rule stay above the origin of the pattern for a Leading Diagonal - otherwise it is ending.

Again, the ES keeps making these expanding patterns. It may have something to do with the Expansion of the money supply by the Fed. It may not. But, I'm not asking these patterns to be made - I'm just counting what I see according to the rules.

So, do have a good start to the holiday if you are celebrating it. I will be.

Yesterday, we said there was a possibility of extending the flat wave (shown in the chart below) upward, to extend a correction in price and time. As a triple combination, though, we said the odds were quite low, as this is a fairly rare pattern. The overnight news that the GSA was going to allow the Biden transition to proceed was greeted well by the market, and prices did add another leg higher, but went so far as to invalidate the potential downward diagonal as shown in the ES hourly chart, below.

As you can see, prices went marginally over the high, but sufficient to invalidate the downward diagonal. So, the alternate pattern we showed at the time of the diagonal creation (w),(x),(y),(x), and (z) - the expanding triple zigzag - takes over the labels. Why this expanding type pattern has repeated on a number of occasions is interesting. First, triple zigzags are quite rare. Second, when triple zigzags occur they 'often' form in a strict channel. So, for the pattern not to be valid likely means it is part of a larger pattern - most likely a triangle. Right now the market is making patterns whose odds are quite low.

That being the case, then moving to the ES 4-Hr chart, below, suggests a 5-3-5 pattern may be in the making, as below. Yes, as a triangle, in the center of the pattern it's odds were fairly low too. But it is countable. 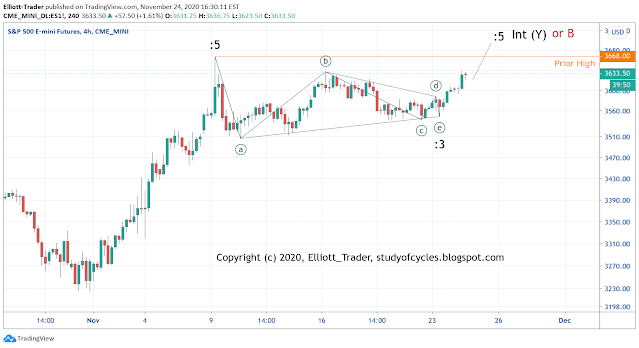 Such a pattern might be to Intermediate (Y) of the upward diagonal looking pattern or Minor B in the larger (X) wave pattern. Those patterns were posted at this LINK. Please have a look if not familiar.

With the holiday about to begin and typically strong stock market seasonal patterns just before this holiday, new highs are not out of the question.

P.S. After the market closed and the data became available, I added this chart. I have shown it many times in the past.

Just 'be aware' of the string of highly speculative readings, and note where the indicator was at the prior market top in February. The 10/50 period moving averages have been lower, but not by much.

It was indicated in prior posts that, after the five-wave diagonal lower, if the market wanted to spend more time in a second or a (b) wave, that the market could make a flat wave. Below, in the ES futures hourly chart, you can see the 'minimum' configuration for a flat wave. 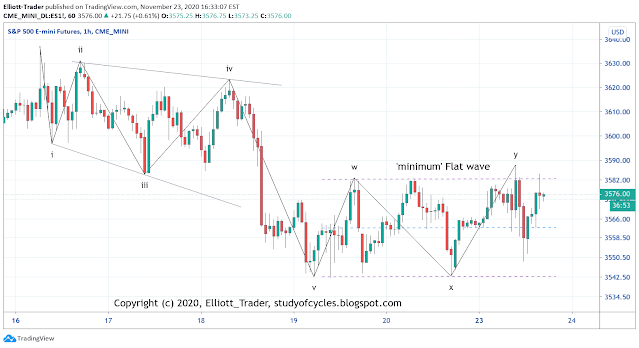 The w, x,and y waves are exceedingly overlapping, and largely three-wave sequences with price held to a close range. The y wave of the flat exceeded the w wave such that there was not a truncation of the pattern.

Price needs to move out of the pattern for further analysis. The pattern shown is the minimum flat configuration, and amounts to a "double-three". Price could - by the rules - go still higher in a more rare triple-three, but the odds of that happening are somewhat lower. On the down side trading below the 'x' wave' in an impulsive fashion may otherwise end the upward correction.

In another development, the Russell 2000 futures marginally cracked the prior high. Other futures indexes such as the YM, NQ and ES have not, as yet.

Catfish or bottom feeders. After the five-wave diagonal we counted downward in near real time, the market tried to mount a rally to the prior 38% high we pointed out yesterday. For the time being at least, it double topped there at 07:00 EST. 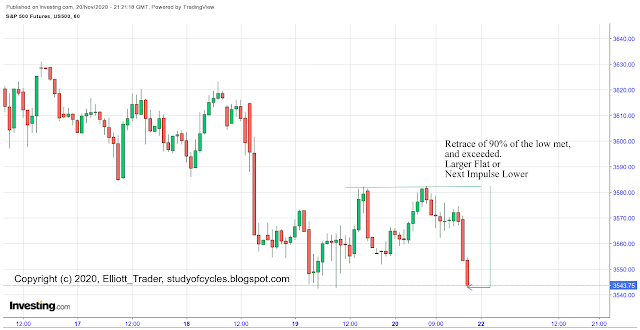 Intraday, we counted out a diagonal, and looked for clues from it. It did break lower but it took a lot of time to do it.

Towards the settlement, in whippy behavior the futures market again made a dive for the lows resembling bottom-feeding fish. While the low did not break by settlement, it could, if it wants in the after-hours tonight or Sunday. All-in-all, most will just see it as a poor close, and perhaps people just leaving the market in advance of the holiday week.

Cash SPX is not showing much, if any at all, of repeated retesting of the bottoms. That is sure interesting - more invisible waves.

The larger count remains as it was yesterday, until this smaller pattern is resolved.

Have a good start to the weekend,

From a wave counting standpoint on the ES 4-Hr chart this is all I have, so far. One can only get so much information from the market. You can't squeeze blood from a stone.

As long as price remains in the downward sloping base channel, a decline is still indicated by the channel. (As always, this is not to be taken as trading or investment advice.) The downward expanding diagonal - which was counted out largely in real time - was retraced a bit more than 38% today. While that is sufficient, it can become longer in time or price by making a Flat wave if it wants. It does not have to.

Today's session was mostly a non-event until the after-hours where a larger candle with quite an upper tail is shaping up.

In this chart (a)/(i), and (b)/(ii) are on equal footing until they are not. Have a very good start to the evening.