A much wiser man than I called the "The Eight Fold Path" the way to enlightenment, and it is in that spirit of sharing that this post is made.

When you survey the world of Elliott Wave analysis, you find that many casual wave analysts will post a chart of "something", with some numbers and letters on it and call it a wave chart, or maybe their "best guess" of where prices are going. But we contend unless people follow a very simple, eight step procedure they will be lost in making objective Elliott Wave counts: counts which are predictive - or like in fourth waves - clearly indicate when prediction is going to be sketchy, at best.

So without further delay - let's outline those simple eight steps, with an example below the steps. All though I didn't explicitly say it in the first posting of this article, I need to make it clear that this method applied to counting Elliott Impulse waves only. In fact, if you follow this method, and the wave does not conform to these guidelines then most likely the wave is a diagonal or part of a larger corrective structure, and not an impulse wave! And knowing that can be a great deal of help as well.

Step 2 - use a bar chart for that wave, and include on it the Elliott Wave Oscillator indicator (EWO). This indicator is also sometimes known as the Awesome Oscillator. Regardless, its just the difference of two simple moving averages; one of 34 periods and one of 5 periods.

Step 3 - locate the maximum value of EWO. This location is reserved for wave iii of 3 in an impulse wave. Note the value of the EWO at this location.

Step 5 - draw a parallel Elliott channel around waves 1, 2, and 3 in an impulse (which alternatively in every wave can be A, B and C).

Step 6 - watch for the EWO to retrace to near the zero line for wave 4. Computer studies have shown that most wave four's will have the EWO retrace to +10% - to -40% of the maximum value of the EWO in Step 3. Further, verify, by measurement that wave four only retraces 23.6 - 50% of wave three, with 50% being an absolute maximum. Beyond, that level any wave four call has extremely low odds.

Step 7 - in an impulse look for wave four to attack the lower channel line in some manner, but then rebound quickly from it - even if there is a false break. In a true impulse, Wave 5, upward, should be under way and should reach a length of 5 = 1, or alternatively, 5 = 0.618 x (net 1 - through 3). Furthermore, wave 5 must end on a further divergence with the Elliott Wave Oscillator.

Step 8 - Verify, verify, verify that there was alternation present. Most second waves are deep, sharp waves. They are typically zigzags or double zigzags that retrace 50 - 62% or more of their first waves. Fourth waves are 'usually' long, complicated sideways affairs such as triangles, flats or compound waves like flat-x-zigzag. Regardless, there should be alternation in a true impulsive structure. In the rare cases where wave 2 is a flat, then wave 4 will 'most likely' be a triangle or a zigzag to alternate with it.

IF the potential WAVE 4 breaks the channel, and does not rebound,  or the EWO takes on more than -40% of the value of wave iii of 3, on the opposite side of zero, then, most likely, the up wave was only the alternate A-B-C, and there is nothing the Elliott analyst can do except objectively accept the result. 1,2,3 and A,B,C are equivalent until they are not. 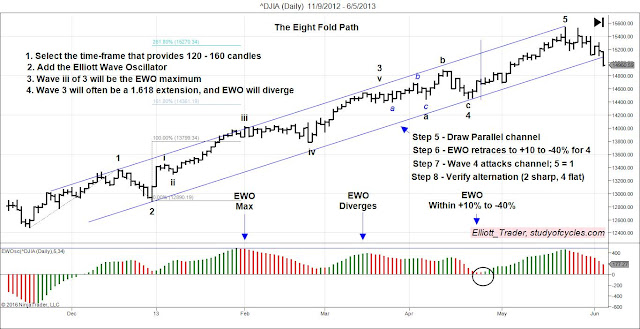 This is a chart to illustrate the above concepts in counting an impulse wave - objectively. First, I decided to study the "up wave from November, 2012 in the Dow Jones Industrial Average", and selected the time frame that best put 120 to 160 candles on the chart. That time frame was "daily". Second, the Elliott Wave Oscillator was added to the chart. Third, the maximum of the Elliott Wave Oscillator was examined, and determined to be the location for wave iii of 3. Fourth, we note that wave 3 just exceeds a 1.618 extension. Note that wave v of 3 ends on a divergence of the Elliott Wave Oscillator.  Fifth, we draw a channel around waves 1,2,3 (or alternatively A,B,C until an impulse is 'proven'). Sixth, we note that the EWO comes very close to the zero line for wave 4. Seventh, we note that wave 4 attacks the lower channel boundary, and wave 5 quickly resumes, and makes a wave which is 5 = 1, and  actually, just slightly beyond. Note again that wave 5 ends on another divergence with the Elliott Wave Oscillator. Finally, and Fibonacci eighth, we verify alternation. Wave 2 is a classic zigzag sharp with a 50% retracement, and wave 4 is a 'compound' FLAT wave. Its a flat to blue 'a', then a flat to blue 'c' & black 'a', then a larger flat to black 'c', & black 4.

Look at how time consuming these fourth waves are! And you know what? I almost guarantee you that no person alive predicted this exact structure. This is the very meaning of the "fourth wave conundrum" as we have presented it in our YouTube video. So, in each case you know what everyone is asking for the better part of a whole month, "What's the count? What's the count?", and thinking, "what kind of Elliotician are you that you don't know what the count is, right now? how am I going to make money following you?! I'm getting whipped around like crazy here." And on and on it goes in those pesky fourth waves.

And yes, there are even slight variations on this - such as when the first wave is the extended wave, but this is the only objective way I know to count the Elliott impulse wave. And, it was discovered by Master Trader Bill Williams, using mainframe SuperComputers to crunch all the data. So, when people say they are being "objective", see if they are meeting this type of simple, defined criteria.

And, yes, I hear you Gen-X'ers and Millenials: you got it. This is a procedure. And you hate procedures. Really? Do I have to follow a procedure? Well .. let's just say "only if you truly want to see the Elliott Wave at work."

Ok, now, for those of you interested in only the modest amount of mathematics, I told you I would tell you the secret of why you need to pick the time-frame that best provides 120 - 160 candles on the chart. Here you go: it is because it takes 5 x 34 = or 170 candles to produce five oscillations around the 34 period moving average of the Elliott Wave Oscillator. Yes, the bright ones among you got it right: the five "oscillations" are the five waves of an Elliott Impulse Wave. So, if you are going to have a chance of seeing that fourth wave come back to the channel with the EWO nearing zero, it must happen starting sometime soon after 120 candles are on the chart.

That's all there is to it! It's that simple! Don't make it more complicated than it is!