The cabal that is running the financial markets (the Federal Reserve, the large banks, the exchanges, the Treasury, and the large hedge funds) are using A-I against the retail trader. A-I just means Artificial Intelligence, and it is really nothing more than a computer and a sophisticated set of algorithms that monitor account balances in real time and have a goal seeking procedure to limit trader profits. If you have been trading for many years, you've heard it expressed as 'maximum pain'. In Elliott Wave terms, let's call it a point of significant uncertainty in the wave count.

You are at a disadvantage. Why? You don't have access to everyone else's position to know minute-by-minute what they are doing. The Exchanges do. The Clearing Firms are charged with knowing your balances and insuring margins are met at all times. In Arby's terms, "they have the beef".

If you are a frequent reader of this blog, you know by now, that one of the algorithms used is the daily Bollinger Band and the relationship of price to the 18-day SMA. Ira Epstein's (Broker with the Linn Group) videos explain this concept on a daily basis. The evidence is clear, frequent and cogent. Friday, prices bounced off of the lower daily Bollinger Band. Is that a surprise, especially after a Fibonacci 89 days of decline?

From an Elliott Wave perspective, we were attempting to count a wave upward, within limits and, so far, it has held. Why didn't it bust? We don't know yet. It still could bust on Sunday or Monday. Like many, we know that, at least temporarily, some trader sentiment (like AAII, and to some degree put-call ratios) were getting a little stretched. So, there could be more rally.

Then, from an Elliott Wave perspective what is one to do? Yes, like many on our Thursday post we showed how you can count two sets of five Minor Waves down. Could they be (A)-(B)-(C) and done? Well, that is 'possible'. But we also noted how the market could make a true extended third wave down, and we simply want to show some measurements that will help confirm or deny it in the ES 8-Hr chart, below. 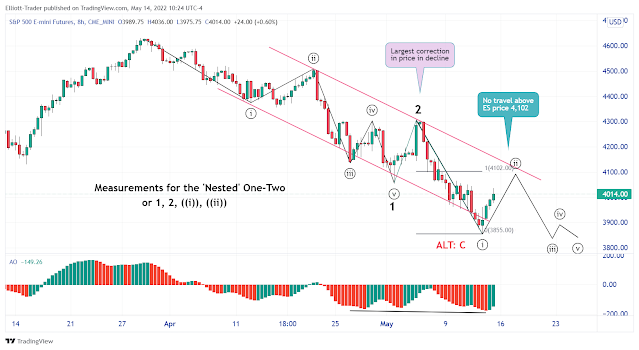 The first item to note is that the Elliott Wave Oscillator is on both a local and daily low. That, by itself, is not definitive. Some C waves do not end on a divergence. So, the bottom is labeled ALT: C. Next, we look for the largest correction in terms of price in the decline. In the nested count, that must be the second wave, labeled 2. We note that it just barely exceeds a 38.2% retrace and note how it could be located at a prior fourth wave, minute ((iv)), circle-iv. And this, coupled with degree labeling definitions, gives us an objective measurement. IF the downward wave is to further accelerate in a nested pattern, then it must remain shorter in price and time than wave 2. That means - as an absolute limit - a minute ((ii)), or circle-ii, wave may not travel beyond ES 4,102 - as shown.

Importantly, we note that minute ((i)), circle-i, does not have to be done at this location, particularly if the expanding diagonal potential we were tracing out on Friday comes to pass. But it could be done. Yet, the first minute ((i)) in wave 3 could be as long in price as Minor 1 is long. It is nowhere near there. We also note that the Thurs-Fri up wave in only in three-waves at this time. Why not five? Could minute ((ii)) be over? It could, but we do not know, and this is the significant uncertainty referred to above.

For now, we note the EWO on the 8-hr time frame is on green bars. And second waves can do some wacky things like form a double zigzag, instead of just the single zigzag we have now. And this points to another thing to watch. Minor 2 in the nested count is a maximum of nine 8-hour bars. And this suggests that if the if up wave passes ten eight-hour bars (or the price limit noted above), then the nested count is likely not working.

If this seems complicated, let's boil it down to its ultimate simplicity: over 4,102 or more than 10 8-hr bars in the making and a nested minute ((ii)) wave is temporarily off the table - at least by degree labeling definitions.

How simple is that? Have an excellent rest of the weekend.